In just one year, the Naira has dropped 1.5 times more in value than it did in the previous 8 years combined! That my friend is quite scary. The Naira is basically falling faster than pure water sachets at an NYSC camp. 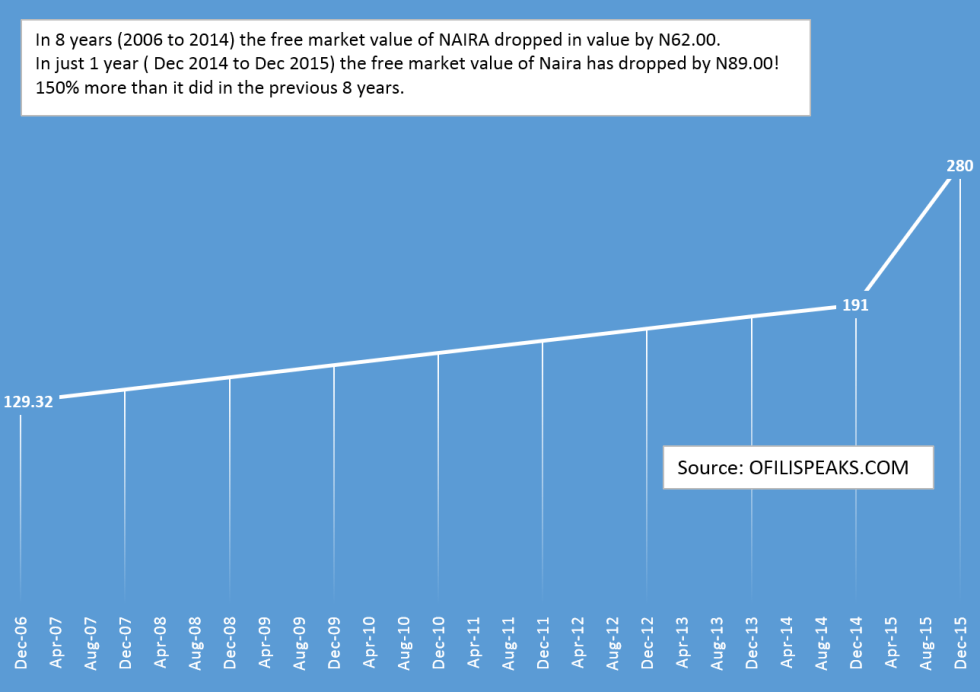 And I know, people are going to point to the fact that the CBN rate is holding firm at N200 and claim it as a positive development in our economic turmoil.

But as I mentioned in my previous article This Is Economics Not Politics that rate is largely artificial and ultimately unsustainable (unless in the unlikely case that the price of Oil suddenly rises in 2016).

To understand this better, the average CBN/Free Market rate difference between the years of 2006 and 2014 was just N4.00. But in the year 2015 only, that difference is a staggering N81.00. This is 20 times the average of the entire past decade! Think about that. 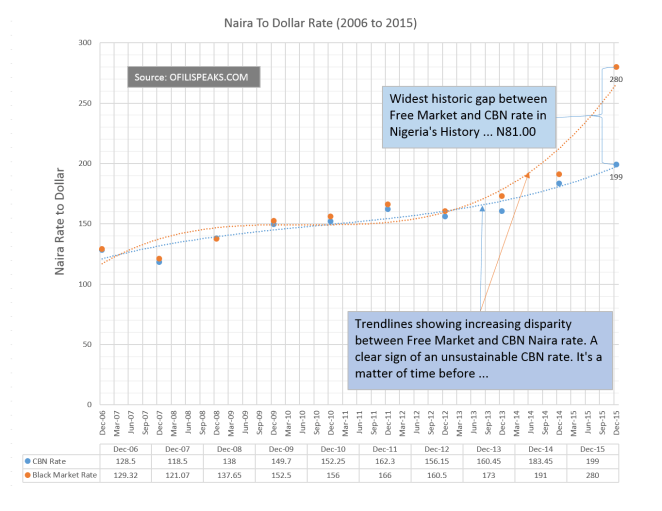 When you see a trend like this, it will tell you that our Economy is basically running on fumes, we don’t have enough currently to sustain the CBN rate. And banks are already beginning to reflect this. For example, Diamond Bank today announced to its customers that they will no longer be able to use their Naira Debit cards in Dubai, China and other African countries. In their own words:

“Due to the current FX market realities, please be informed that your Naira Debit Card has been restricted for usage in UAE, China and African countries.”

So who do we blame?

Frankly, I don’t care. I don’t want to enter in yet another political battle that solves nothing.

What I am trying to do with this article is to tell people whether they support PDP, APC or even KOWA that our Economy is in a state of emergency. I am begging Nigerians to pull themselves out of party propaganda, finger-pointing and all the normal bullshit and instead pull-out their calculators and start computing the impending doom.

When we accept that there is an impending doom, then we would have the tools to start asking the right questions from our Government to prevent it. Questions like … “What is the new Finance Minister economic strategy?” “What is the plan to generate revenue when Oil is falling so fast” “What is our jobs strategy” “How are we going to attract foreign investors?” we need to start talking now before it is too late.

Sadly, we are too quiet. The media is quiet, the citizens are quiet, absolute silence … no one is asking questions and that worries me …