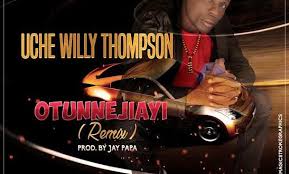 SIR UCHE WILLY THOMPSON the philosophical musician from the south
south part of the country is here again with the remix of the popular
Otunnejiayi song. The original version of this evergreen song was
lunched and officially released in the year 1997 August as a full
album of six songs like Jaga jaga, vision, it’s you, owaziomi, and I.
J. C. special. Till date the song otunnejiayi remains an evergreen.

Otunnejiayi as a peace and unity song, an inspirational song has
inspired alot of old and young music lovers within and even beyond the
Niger Delta. Despite it was done in a native language it did not limit
it from educating people of the Niger Delta and beyond about the need
for love,peace,and unity in the areas that lacks as well as healing
the sick of their pain,hypertension,sorrow, weakness etc through the
song. Using this medium to ask people to leave their self centered
ness,status,riches and come lets cultivate the spirit of oneness. He
sincerely thank all his friends,fans and Well wishers who believe that
Uche Willy Thompson has what it takes musically to offer any time any
day to the people of Niger Delta and the world at large.

keep your fingers crossed for the full album with maximum of 15 to 20
songs in no distance time.

Shaydee – No Lie (Prod By Spax)