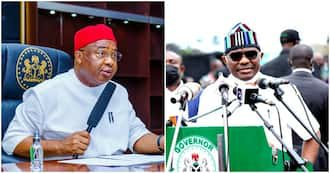 Governor Nyesom Wike of Rivers State has said that Governor Hope Uzodinma is giving the impression that he knows about the circumstances surrounding the death of Ahmed Gulak by pronouncing the killing as a political assassination.

The Rivers state governor made the statement in an interview with Channels Television on Monday, May 31.

He asked his Imo State counterpart to allow security operatives to conclude their investigation before attributing the murder of the All Progressives Congress (APC) chieftain as a political assassination.

Wike said it was too early for Uzodinma to reach such a conclusion.

“Having done that, it means that you already know those who committed the crime and that will not be fair. When things of this nature happen, allow the security agencies to really go into the matter and then say look, from our investigations, this is what we found out.”
Governor Wike sympathised with the family of Ahmed Gulak over the killing of the politician.

“They Are My Sons” – Singer Dencia Shades Davido, Burna Boy, As She Flaunts Her 3rd Rolls Royce