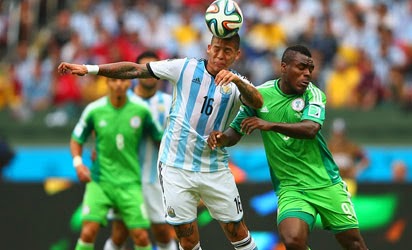 Emmanuel Emenike Chelsea have lodged a surprise €20m offer with Turkish giants Fenerbahce for Nigeria striker Emmanuel Emenike and are ready to wrap a deal one of Europe’s most quickest, if not unpredictable forwards once the World Cup concludes.

Emenike has spent less than 12 months with Fener after completing a late switch to Istanbul from Spartak Moscow last summer, but Turkish newspaper Fanatik is reported by the Metro to believe that Chelsea are chasing fresh strike cover in a move that has come completely out of the blue.

Marcos Rojo of Argentina goes for a header against Emmanuel Emenike of Nigeria during the 2014 FIFA World Cup Brazil Group F match between Nigeria and Argentina at Estadio Beira-Rio on June 25, 2014 in Porto Alegre, Brazil. (FIFA)

Jose Mourinho still views Atletico Madrid marksman Diego Costa as his number one strike star for next season, with today’s shock move for Emenike completely independent of that long-awaited deal, which is still expected to go through for a fee of £32m before the end of this week.

Emenike is currently strutting his stuff for Nigeria at the World Cup….vanguard news