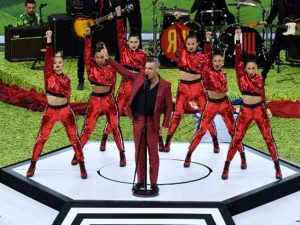 The FIFA World Cup, the biggest sporting carnival on the planet, is all set to kick-start today. As Russia gets dressed to host the much-awaited event, fans from all over the world are set to see their favourite superstars in action. Brazilian great Ronaldo and British pop star Robbie Williams will be present at the opening ceremony. Robbie Williams, who is best known for his hit single “Angels”, will sing alongside Russian soprano Aida Garifullina shortly before Russia face Saudi Arabia in the first match of the FIFA World Cup at Moscow’s Luzhniki Stadium. Williams had said that performing at the FIFA World Cup was “a boyhood dream” and it would be “an unforgettable show”.

However, the role of Ronaldo, whose creative director is local producer Felix Mikhailov, is yet to be ascertained. Unlike previous editions, this year’s opening ceremony will take place just half hour before the curtain-raiser match, with a stronger focus on musical acts. Some 80,000 fans are expected to be in attendance while millions more will watch the live broadcast around the world. Meanwhile, another Brazilian legend Pele may not be part of the opening ceremony and the inaugural match of the FIFA World Cup has cancelled his scheduled trip to Russia because of ill health.

The imposing 80,000-seat arena has been rebuilt from the days it hosted the 1980 Summer Olympics and will be the venue of both Thursday’s tournament kickoff and the July 15 final. President Vladimir Putin has already said he expects to see much better from Russia when he arrives in Luzhniki for the opening ceremony. The stadium will host seven matches including 4 group matches (Russia vs Saudi Arabia, Germany vs Mexico, Portugal vs Morocco, Denmark vs France), one semi-final and the summit clash.