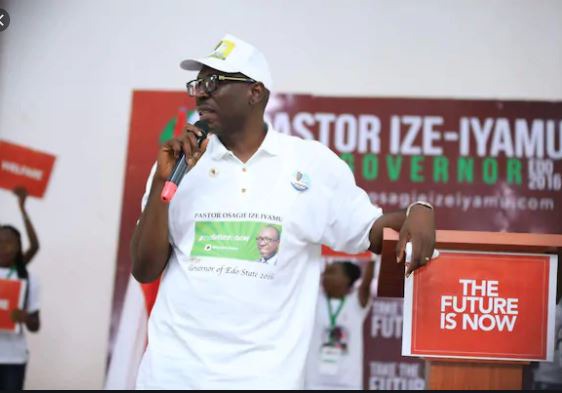 Osagie Ize-Iyamu representing the All Progressive Congress Party (APC) and, Godwin Obaseki, the incumbent governor re-running for the second term under the flag of Peoples Democracy Party (PDP).

There has been a lot of heat concerning the Edo state governorship election with candidates from both parties not leaving any stone behind to ensure they have the backing of the majority during the soon to hold election.

However, the fate of each candidate hangs on the balance or to better put it, in the hand of the state residence who will go all out to cast their vote for whom they believe will lead them to the glorious Edo state they desire.

Nonetheless, both candidates have been going hot over one another for a while now, with each candidate claiming their competency over the other.

Nonetheless, Obaseki, who represents PDP defected to the party of recent from the APC because of the misunderstanding and rift he had with his predecessor, Adams Oshiomhole, who used to be the national chairman of the APC.

Governor Obaseki decided to leave his former party APC and move over to the PDP where he currently is the flag bearer of as the governorship candidate representing the party in the forthcoming gubernatorial election.

He left the party as a result of his disqualification from contesting in the governorship primary election in the APC due to allegations of inconsistencies in his certificates which he presented to the governorship election screening committee. Since then, Obaseki is doing all in his power to emerge victorious in the soon to be held election.

Among the 14 candidates that will partake in the forthcoming election, two candidates seem to be taking the shine from others, that is the seating governor Obaseki, and the APC governorship representative Ize-Iyamu, the man who seems to have the support of Adams Oshiomole.

The two candidates have been at a loggerhead, spotting the weakness of one another and why each of the candidates think they deserve to be governor. Obaseki is believed to have won the people’s sympathy because of what they believe to be a maltreatment which he suffered from the hands of Oshiomole and a win for him will see him humiliate and hurt the former APC national chairman’s ego.

While Ize-Iyamu on the other hand capitalize on the fact that the incumbent governor has done little or nothing to change the poor nature of the state.

So far, there has been ongoing intense mobilization and campaign rally to mobilize for supports as the countdown to the September 19 election draws closer. While some are rooting for Ize-Iyamu with the believe that he is the change the state needs, others are rooting for the incumbent governor with the hope of continuity of the good work which he has begun in the state.

Currently, Ize-Iyamu is currently facing the heat from critics who still couldn’t understand why he will become the lap dog of Oshiomole, the same man he criticize sometimes in 2016. Probably because he was instrumental in helping him secure the governorship candidacy of the party which he joined sometimes last year.

Meanwhile Obaseki on the other hand is facing heat from critics why he will defect from APC to PDP, the party he heavily accused some years back. These occurrences has made some to doubt the credibility of both candidates believing they are more concerned about themselves than the welfare of the state.

Whichever way it goes, we keep our hands crossed watching what is going on at the moment especially how these two goes at each other and play the blame game so that they can portray a negative image of the other while painting a good image for themselves.

Howbeit, the fate of both gubernatorial candidates will be sealed come September 19th.