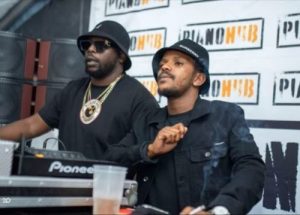 They take it to a new level this time as they team up for their fans.

Scorpion Kings and Tresor last made their appearance on a joint album titled Rumble In The Jungle.

In promoting the album last year, they came ahead with a track titled Funu, which appears as the second track on the album.

They also dropped Folasade off the album where Tresor expressed his love for the Nigerian girl titled Folasade.

Taking it to a new level, they drop this combo track.